Teatro Strappato is the New Antique Theatre, a craftsman genre of “hand made” plays, where different trades are at the service of a unique art: the Theatre.

As in front of a mirror, just a plate of glass and silver, a man can attend the illusion of seeing his image reflected, in the theatre, the audience can see their ideas, opinions, intentions, reflected , through the mystery behind the curtain… that is what the experience of going to the theatre has been considered as for centuries. 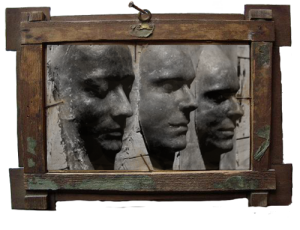 We are proud of considering, in this sense, our craftsman theatre as very rich. Our means are Music and the Masks.

Since ancient times, humans have been fascinated by the use of masks, this is due to an unexpected and strange phenomenon: when a person is undressed you can see just his body, when the same person wears a mask you can see his soul, for this reason masks are considered sacred objects in almost all cultures, and they are sacred also in our theatre, where characters enter the scene with a covered body and a naked soul.

Music is equally important, as it is able to translate into sounds what belongs to the most silent part of the human being, his thoughts, his feelings, his emotions; The motor of the world and consequently of the scene.

The New Antique Theatre is the theatre of live music, hand made masks and costumes, fabric scenery, actors without microphones and an audience with their eyes open.

THE NAME OF THE COMPANY

Our company comes to life from the idea of “necessity” as the initial condition, the essential requirement for the poetic stroke, the spark that starts the engine of the artistic research, the link between Reality and Art.

The main challenge of Theatre is to speak about reality without being realistic, so the search of the appropriated expressive means to transport to the scene the most realistic part of life, which further contains it: its contrasts, its oxymoron, its bittersweetness, its cheerful white naiveté with its tragic black abyss.

The goal of our research is “strappare” (snatching) from each story its theatrical part and finding a new “language” that allows to reveal it.