Teatro Strappato is and intense journey, made while finding exceptional people, places that are constantly different, and fascinating stories. 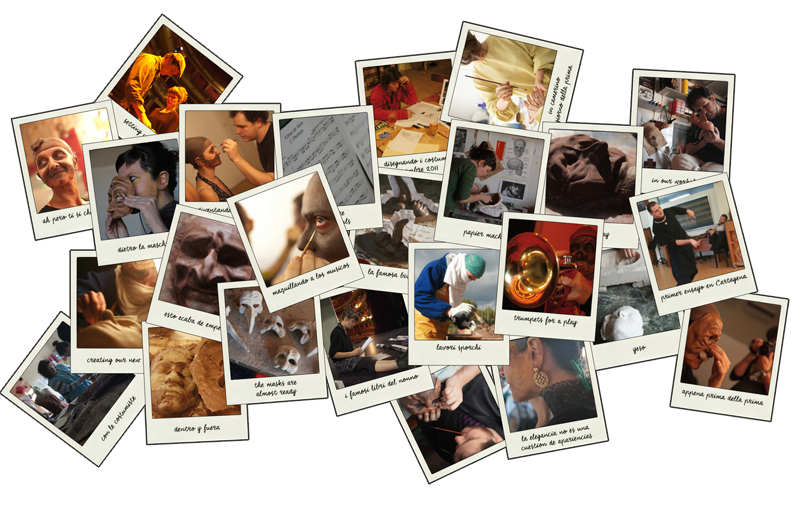 Teatro Strappato is an idea, a necessity that Cecilia Scrittore (Italy) and Vene Vieitez (Venezuela) have had in common since 2011, having been working in Italy in one of the most prestigious companies of Commedia dell’Arte worldwide.

That same year the first production of Teatro Strappato was born, one that would define a completely new direction of investigation, “Souls of Brass” (text and direction by Vene Vieitez, original music by Juan Miguel Murani). The company travelled to Spain to create together with the renowned composer Juan Miguel Murani and the horn player Jesús Martínez a show with four musicians and two actors on stage. The interesting artistic challenge was to give life to characters with masked bodies and souls of music.

In the year 2012 they collaborate with the formation Harmonie XXI, taking on the task of the direction and production of a concert staged around the important work of F.J. Haydn “The Creation”.

In 2013, Strappato’s research on the new expressive possibilities of leather masks resulted in one of the company’s most important shows, “An Insignificant Story” (text and direction by Vene Vieitez), which premiered in the famous Romea Theatre in Murcia (Spain).

In 2014 the company begins the year presenting “Step by Step”, a show born from a new investigation of Teatro Strappato: the Italian influence in the Spanish Renaissance as far as literature and theatrical languages are concerned. The show braids, in a fun dramatised conference, to the brief theatre of Lope de Rueda with explanations that are essential to fully understand a genre as important as it is unknown.

In the same year the company was commissioned by several localities of the Province of Venice to create the show on the Commedia dell’Arte “Cabaret 1500”. It is a selection of scenes of great popular comedy, a theatrical journey from Plauto to our current days.

In the autumn of 2014 the project “The sandcastle ” is born, a collaboration with the Bilingual Centre’s for children’s education in Berlin. With “The Sand Castle” Teatro Strappato investigates a theatrical and musical language that brings children closer, enhancing the imagination, to the world of theatre. After the success in Berlin of this project the company has also proposed to carry it out in Italy and Spain, where it has been received with great enthusiasm.

The year 2015 begins for Teatro Strappato with an important collaboration with the most prestigious ensemble of Renaissance music in Spain, the ensemble “La Danserye”. Both groups join forces and knowledge on music and theatre of the Cinquecento to create “Mendrugo”, a theatrical concert about a16th century fool. This show is an authentic display of masks of the Commedia dell ‘Arte and early music instruments.

During the winter of 2015, a mask workshop took place, and in the rehearsal room of Teatro Strappato, they worked on a new show that proposes an interpretation technique with masks, and an innovative way of elaborating them. “Scarlet Dream” opens a new chapter for Teatro Strappato in which the story is told with images and live pictures that are transformed before the audience’s eyes. A practically mute show that says a lot. “Composable masks” is the name that Teatro Strappato has given to these new masks that are transformed before the audience. Towards the end of 2015 the company designed “The Jesters’ Trunk”, an anthology of show-conferences on the history of the theatre, its great themes and characters. This show premiered with it’s Italian version in December 2015 in Italy and in January 2016 with it’s Spanish version in the city of La Paz (Bolivia).

The year 2016 begins, in fact, with a research trip that the company makes in Bolivia, addressing the issue of street children and the social circumstances that make Latin America one of the main centres of abandoned infants worldwide. For one month, the company members travelled around the country conducting interviews, gathering information and carrying out a theatre workshop with children who have lived on the street. This material arrives in the rehearsal room of Teatro Strappato and becomes, in the months following the trip, BETÚN “4 dreams and 5 realities of a street life”, a silent show that opens in July 2016 at the festival Of Avignon Le Off (France).

Continuing with a spirit of research that leads Teatro Strappato to constantly look at both the present and the past, the company is working on the creation of “Lazarillo”, a show that analyses and presents the picaresque genre and Carlos V’s Spain in a comical manner. This production premieres in January 2017 and during its first two months is seen by more than 5,000 students.

In March 2017 Teatro Strappato co-produce with Cantoría, early music vocal ensemble, a theatrical concert titled “Orpheus: music, love and death” in which they interpret texts and music by Monteverdi, Quevedo, Rilke and other authors who passionately faced this great myth.

After having presented “BETÚN” in France, Spain, Switzerland, Germany, Italy, Chile and Bolivia, the production returns, one year since it’s premiere, to the Off Festival of Avignon 2017 (France) and the Molina del Segura International Theater Festival (Spain) where it is awarded as best stage show.

The success of “BETÚN” has led the company to tour Spain, the United Kingdom, Germany and Bolivia at the beginning of 2018, where the show received excellent reviews at the International Theater Festival of La Paz.

In the autumn of 2018 a new comic show is born with which Teatro Strappato brings some of the traditional classic myths with a rhythm and humor that only masks can achieve. This show entitled “MitoIlogico” premiered in December 2018 in Italy and in January 2019 began its trip in Spain.

At the beginning of 2019 the company was selected by “Factoria Cultural” of the Institute of Cultural Industries and Arts (ICA) of the Region of Murcia for the consolidation and development of Teatro Strappato as a company in the cultural sector.

In the summer of 2019, the Betún show participated for the third time in the Avignon Festival, reaping great public success and receiving the Tournesol award in that edition.
At the beginning of 2020, when the company found itself immersed in the production of a new show, quarantine arrived and both the production and the tours planned for Europe and Latin America were postponed indefinitely. In this long period of being on stand-by, Cecilia Scrittore and Vene Vieitez took the opportunity to develop new projects parallel to the company’s scenic activity. On the one hand, “Teatro Strappato to your ear” was born, a line of radio drama creation that opened with a trilogy written by Vene Vieitez, inspired by three female characters from Greek tragedies and titled “Ancient tragedies, contemporary dramas”. On the other hand, in January 2021 the biweekly podcast in Spanish “The Spark of Prometheus” was born, a programme in which each season is dedicated to a theme related to what Teatro Strappato is working on during that period. “The Spark of Prometheus” is a way of sharing with the audience the investigations and behind-the-scenes work the company carries out.
Finally in mid-2021 the company resumed production work of new show, written by Vene Vieitez with original music by Juan Miguel Murani entitled “Triboulet”, a piece about manipulation and instrumentalisation, the result of many reflections before and after pandemic. The premiere of “Triboulet” will take place on the 3rd of December 2021, in streaming from UfaFabrik in Berlin.

ABOUT THE AUTHOR VENE VIEITEZ

Vene Vieitez started out in 2005 with his first theatrical text, “Cuando volver no existe” (When going back is impossible), a play focussing on social issues, thus creating a bridge between his training in sociology and drama. Over time he developed an equally analytical and ironic style that he consolidated with the works of Teatro Strappato, a company he founded in 2011 together with Cecilia Scrittore and where he now leads its two lines of research.
Teatro Strappato on one hand works on a new language, which seeks out the current expressive possibilities of masks on stage, and on the other hand upholds a curious gaze into the past, carrying out research into human archetypes in the history of theatre and the use of the mask as a tool for identifying these very archetypes. As the mask is central to both the historical and experimental research work of Teatro Strappato, Cecilia Scrittore and Vene Vieitez are also involved in the design and development of these leather face pieces.

She studied Performing Arts at the University of Bologna, graduating with a thesis on youth theatre. In 2005 she began to work in theatre projects with the mentally disabled and the elderly. In 2007 she joined the Scuola Sperimentale dell’Attore in Pordenone (Italy) as a teacher and member of the Hellequin company, where she specialised in Commedia dell’Arte. In 2007 she studied the performative discipline of Buto with the famous Japanese teacher Yumiko Yoshioka. She then went on to study, in 2009, Kathakali Dance Theatre with the Indian teacher Kalamandalan John and his company. In 2010 she participated in a creative laboratory with César Brie, founder of ‘Teatro de Los Andes’, based on the onstage use of metaphors. In 2011 she moved to Spain to found TEATRO STRAPPATO together with Vene Vieitez.

ABOUT THE COMPOSER JUAN MIGUEL MURANI

Juan Miguel Murani began to study piano at the age of 5. He studied at the Murcia Conservatory of Music with Miguel Baró and Anselmo de la Campa. After obtaining the “Higher Piano Degree” in Murcia, he received a scholarship from the Spanish Government to continue his training in Moscow for 7 years, studying at the Tchaikovsky Conservatory and later at the Gnessin Russian Academy of Music, two of the most prestigious musical institutions in the world.
He finished his piano and composition studies at the Gnessin obtaining a Masters in Fine Arts with Honors (maximum marks in all disciplines), becoming the first European pianist to win the “Red Prize”, the supreme consecration of this institution. His piano teachers include Margarita Fedorova (Neuhaus’s disciple) at the Tchaikovsky Conservatory and Nikita Yujanin and Valentina Zvereva (Gutman’s disciple) at the Genessin. In the field of chamber music, he was a student of the renowned Georgi Fedorenko.
In addition to the largest and most well-renowned Spanish venues, he has offered recitals internationally in cities such as New York, Chicago, Calgary, London, Paris, Toulouse, Edinburgh, Vienna, Munich, Bratislava, Moscow and international piano festivals such as “Piano aux Jacobins” or “Piano Passion”. As an orchestral soloist, he has performed with the St. Bridge’s Chamber Orchestra in London, “Virtuosos de Moscow”, the Pau ‘Orchester Sinphonique’, the Amsterdam Camerata, Wroclaw Philharmonic, the Castilla y León Symphony Orchestra, Madrid Philharmonic Orchestra and Murcia Symphony.
He has held around 300 recitals, making him one of the most prolific pianists in Spain.