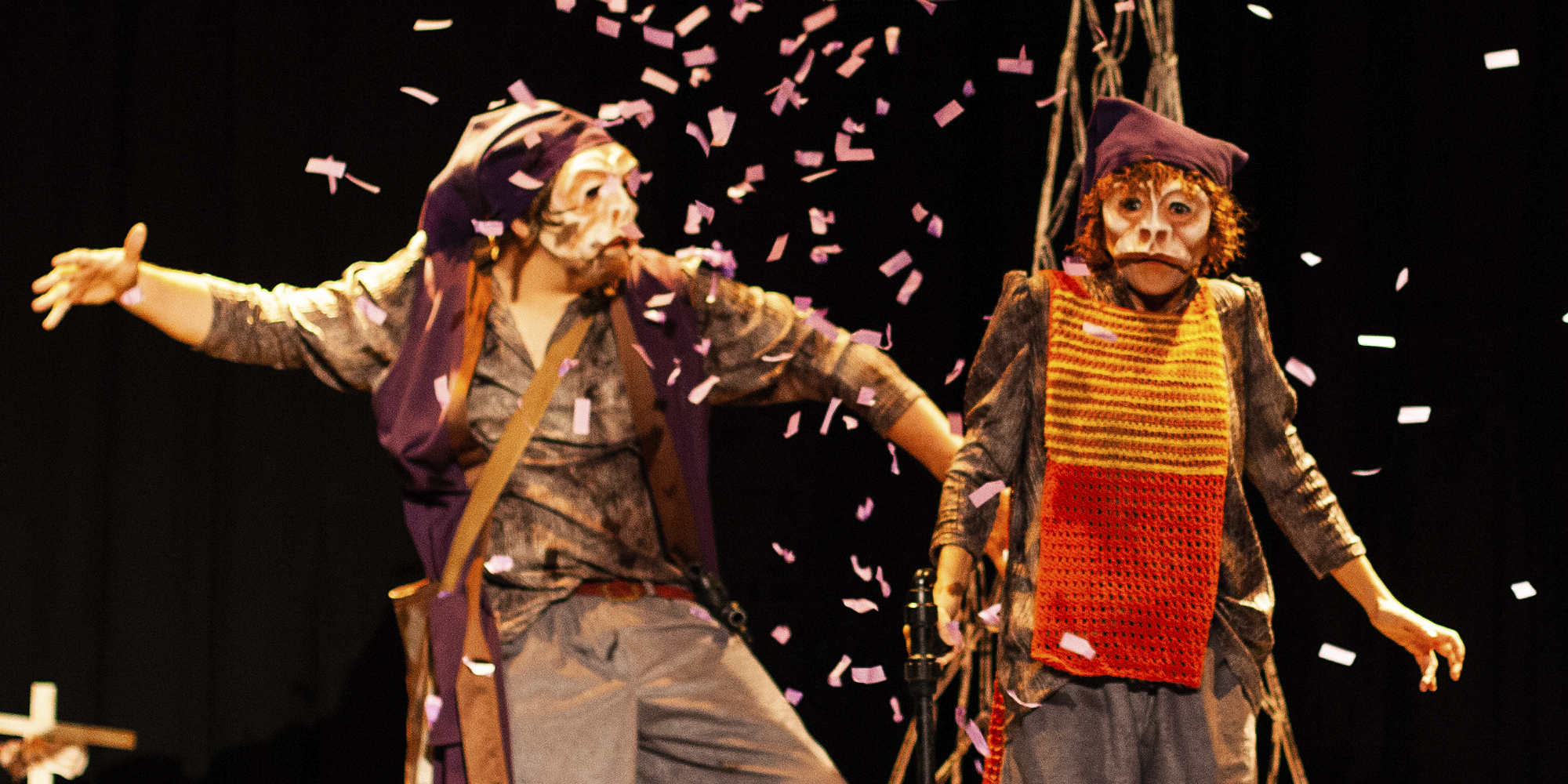 When Victor Hugo wrote “Le roi s’amuse”, the play was immediately censored due to the fact that the King and his circle are portrayed with little respect, shown to be too libertine, indifferent, selfish … It was the year 1832. And today? Nowadays, the vices of men of power no longer generate scandal, so much so that it is no longer necessary to hide them, so why tell this story today? Because in reality, in current times, we do not want to hear about indifference and selfishness, especially if it is regarding those of us from the “first world” who are being accused. Proud of our progress and our wealth, we do not who else’s hide has allowed us to become rich, and we prefer to forget who has been crushed to allow us to live in a state well-being. It is easier to turn our heads and face away, because deep down it is not none of our business … our children are fine. This work is intended as a pretext, a motif, made of images and music, to reflect on ourselves.

Teatro Strappato began in 2018 to think about an adaptation of Hugo’s work, about how to bring its living core, how to bring out the heart of the drama today continues to be a strong denunciation of the horrors of human behavior. At the beginning of 2020 the company began to rehearse and create the “Triboulet” masks … and at that moment the whole world took a turn and appeared to stop. The premiere scheduled in Berlin for November 2020 was postponed, the production work was interrupted and when the raison d’être of this show is resumed in mid-2021 becomes even more meaningful, it becomes evident … “Triboulet”, a work about manipulation, is more necessary than ever but in the meantime the world has changed and the work begins with the rewriting of the dramaturgy. The weapon, the great tool of manipulation is information and everything, absolutely everything, is possible thanks to a prestigious game, to illusion, to the conviction that truth and information are the same thing.

Inevitably, approaching “Le roi s’amuse” also means encountering Verdi and his “Rigoletto”, an operatic transposition of Hugo’s text. The company then began to work on two levels: on the one hand, the idea of ​​the show is to elaborate the contents of the original text in the direction of bringing a series of “human beasts” to the scene, blinded by selfishness and caged in their own deceptions, unscrupulous executioners, victims only of themselves; on the other hand, the creative spark develops into giving voice to the characters, their feelings and their actions through a rewriting for five instruments of the powerful music of Verdi. These “modern monsters” will be moved by the heart-wrenching force of the electric guitar, propelled by the drums, enveloped in the universe of sounds of the accordion, the clarinet will speak to them through its lively and poetic voice and they will be dragged without pause by the moving cello. The dramatic and comic moments alternate without interruption and the most disturbing and the most ridiculous aspects will emerge spontaneously throughout the development of the action, in the change of the pictures.

The expressiveness of the bodies triggers the strength and force of the masks, both comic and tragic, masks that are used as faces, that have prostheses that transform them, masks as heads that move by themselves, masks as independent figures, masks as full characters. The protagonists fight the “cage” of the stage, a cage that they constantly create for themselves, without variations … and at time it will seem that they dance, that they fight and that they suffer, but they will always only be interpreting the farce of life.

The message that will come from the stage is encrypted, the show is full of reading keys, and everyone one will find his or her clue and the stories that will flourish in their heads will be infinite, the planted seed will grow and take innumerable forms … once again, theatre will become communication .

THE MUSIC FOR TRIBOULET

Hugo’s story carries a strong political metaphor that is dramatically current, a game of indifference, manipulation and power. With this ball of misery, today we weave our world and live without paying attention to the pain we cause, we become a cog in a consumer machine. Verdi’s harmonies mutate and are reborn in this new Triboulet narration with an “industrial” tone, disturbing and at the same time fun. The orchestra, the choir and the singers are replaced by an electric guitar, an accordion, a cello, a clarinet and drums. The musical project begins with the adaptation of the scores, and concludes with a recording of the new version, allowing the show to be performed with both live and recorded music.

THE RELATIONSHIP WITH MUSIC

In 2015, Teatro Strappato began a process of research and experimentation that profoundly marked all of the company’s successive productions. It is about a deepening, in a certain extreme sense, of their work on the expressiveness of the actor’s body. The new challenge is to reduce the text, leaving space for movement and opening new horizons in the relationship with music on stage. The company is researching towards “choreographed gesture”, to develop a sensitivity for music that enhances the actors’ expressive capacities.

The characters’ actions are the result of movement and music, the scene speaks and shows emotions through images. It is not dance, it is not mime, it is not musical theater, it is a new way of speaking in which no words are required.

ABOUT THE AUTHOR VENE VIEITEZ

Vene Vieitez started out in 2005 with his first theatrical text, “Cuando volver no existe” (When going back is impossible), a play focussing on social issues, thus creating a bridge between his training in sociology and drama. Over time he developed an equally analytical and ironic style that he consolidated with the works of Teatro Strappato, a company he founded in 2011 together with Cecilia Scrittore and where he now leads its two lines of research.

Teatro Strappato on one hand works on a new language, which seeks out the current expressive possibilities of masks on stage, and on the other hand upholds a curious gaze into the past, carrying out research into human archetypes in the history of theatre and the use of the mask as a tool for identifying these very archetypes. As the mask is central to both the historical and experimental research work of Teatro Strappato, Cecilia Scrittore and Vene Vieitez are also involved in the design and development of these leather face pieces.

ABOUT THE COMPOSER JUAN MIGUEL MURANI

Juan Miguel Murani began to study piano at the age of 5. He studied at the Murcia Conservatory of Music with Miguel Baró and Anselmo de la Campa. After obtaining the “Higher Piano Degree” in Murcia, he received a scholarship from the Spanish Government to continue his training in Moscow for 7 years, studying at the Tchaikovsky Conservatory and later at the Gnessin Russian Academy of Music, two of the most prestigious musical institutions in the world.

He finished his piano and composition studies at the Gnessin obtaining a Masters in Fine Arts with Honors (maximum marks in all disciplines), becoming the first European pianist to win the “Red Prize”, the supreme consecration of this institution. His piano teachers include Margarita Fedorova (Neuhaus’s disciple) at the Tchaikovsky Conservatory and Nikita Yujanin and Valentina Zvereva (Gutman’s disciple) at the Genessin. In the field of chamber music, he was a student of the renowned Georgi Fedorenko.

In addition to the largest and most well-renowned Spanish venues, he has offered recitals internationally in cities such as New York, Chicago, Calgary, London, Paris, Toulouse, Edinburgh, Vienna, Munich, Bratislava, Moscow and international piano festivals such as “Piano aux Jacobins” or “Piano Passion”. As an orchestral soloist, he has performed with the St. Bridge’s Chamber Orchestra in London, “Virtuosos de Moscow”, the Pau ‘Orchester Sinphonique’, the Amsterdam Camerata, Wroclaw Philharmonic, the Castilla y León Symphony Orchestra, Madrid Philharmonic Orchestra and Murcia Symphony.

He has held around 300 recitals, making him one of the most prolific pianists in Spain.